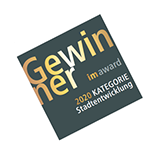 Press articles about the Überseestadt

Our basic press information on the Überseestadt Bremen provides information on one of the largest urban development projects in Europe and provides current figures from the district.
You will find current press releases below or as downloads in our download area on the right side.

Überseestadt Bremen: Breathing new life into the old docklands
From an abandoned port to a bustling “world of possibilities”: Since the early 2000s, the former docklands in Bremen’s western quarter have been under development to create a new “Überseestadt”. Bremeninvest has been commissioned by Bremen’s Senator for the Economy, Employment and Ports to improve infrastructure, successfully put commercial and residential properties on the market, help companies establish their business there and actively provide the various stakeholders in the Überseestadt with the support needed to fill this new district in Walle with life.

The Überseestadt is located exactly where great international cargo ships used to be docked, loaded and unloaded (hence its name as the “City Beyond the Seas”). By the late 1980s, however, the Europahafen and international seaport had failed to adapt to the developments in modern container shipping, leading to several vacancies around the harbour basin. The Senate of Bremen approved a master plan in 2000 to restructure the former docklands to the right of the Weser. The idea was to reclaim the area for urban living and business by creating a new district: the Überseestadt. All local developments are still based on this master plan to this day.

One of Europe’s largest urban development projects
It seamlessly joins the list of outstanding European port regeneration projects and is one of the largest urban development schemes of its kind. Bremeninvest is driving development work over the Überseestadt’s 1km x 3.5km plot of land. “We expect the Überseestadt and its infrastructure to be fully marketed by 2025”, predicts Andreas Heyer, the Chairman of the Board at Bremeninvest. This is a realistic goal considering the impressive rate of development so far: “The Überseestadt is developing really quickly with great success.
The Überseestadt’s location near the city centre is an important factor: It’s just under two kilometres away from Bremen Cathedral, and you can get there by walking along the popular “Schlachte” promenade by the river Weser. As a district in Bremen-Walle, the Überseestadt can be reached directly using public transport, the A27 and A281 motorways, and from Bremen Airport via the B6 road.

The old and the new
The Überseestadt is different from other projects of its kind in that the people of Bremen have opted against a general overhaul, deciding instead to retain the existing port industry while developing new open spaces for a wide range of uses.
The Überseestadt’s redevelopment has breathed new life into its port and logistics companies, its historical storage facilities and sheds, and Bremen’s long-established companies. Its central promenade is formed by the restructured quayside of the Europahafen. June 2011 saw the inauguration of a marina at the Europahafen with mooring facilities for both private boats and passenger ships.

New properties have been under development around the harbour basin since 2003, and they all fit in nicely among the surrounding storage facilities. Elaborate restoration work has also been carried out on several old and listed buildings. Retailers and long-standing companies have been joined in the area by young start-ups. Companies from the cultural and creative sectors have also proven to be a stroke of luck for Bremen’s city planners; they were among the first businesses to become established in the Überseestadt after believing in its potential.

The living spaces, jobs and various other activities available in the Überseestadt accentuate its quality as a “world of possibilities”. The new quarter on the waterfront is characterised by perfect harmony between the past, present and future, the old and the new. 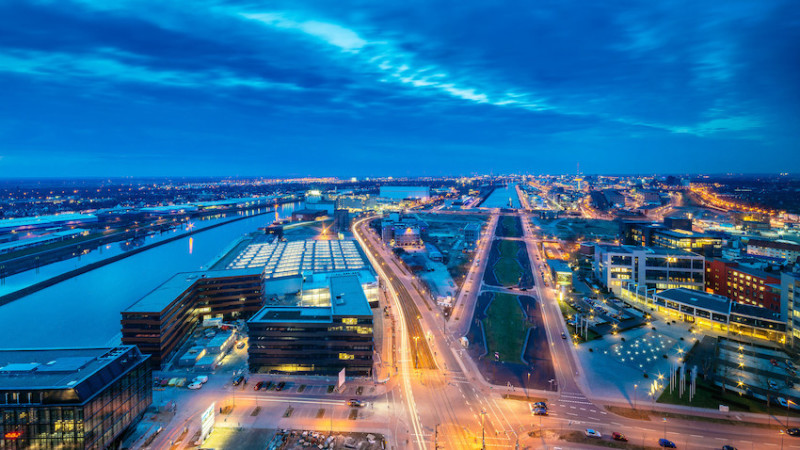 The Überseestadt in Bremen: breathing new life into the old docklands
Bremen, August 2020. The wind of change is blowing through the Überseestadt. The new quarter is becoming increasingly diverse, urban and cool with its innovative construction projects, new traffic concepts and a wide range of leisure activities, educational facilities and retail outlets.

The Überseestadt is developing at a rate of knots. A new district is emerging in the former docklands in the west of Bremen. With an area of almost 300 hectares, the Überseestadt is one of the largest urban development projects in Europe. The “Überseeinsel” is another important development that is looking to reclaim the banks of the Weser for locals and create added value for the Überseestadt. A futuristic urban district is emerging with a combination of housing, business, culture, leisure and education. The local developers envisage a place with lots of greenery, limited traffic and a largely carbon-neutral energy supply. The plan is to build 1,200 residential units and workplaces for up to 3,000 people in the coming years. Various business plans have also been made, including a hotel and an organic supermarket. A brewery, a beer garden and two new restaurants have already settled on the former Kellogg’s site.

Innovative homes and office space
Another major project that will enrich the Überseestadt in many different ways can be seen at the top of the Europahafen, where four buildings are being erected by the local contractor Kurt Zech, including the new Zech headquarters, two blocks of flats and a centre for environmentally friendly transport solutions (known as a “mobility house”). There will also be enough space for restaurants and culture, as exhibition areas and a street food market are planned on the ground floor. The mobility house will feature parking facilities and charging stations for bicycles and cars to help reduce traffic in the Überseestadt.

New traffic concepts for the district
In an effort to improve traffic levels in the Überseestadt even further, the city of Bremen is planning to build a bridge that will take cyclists and pedestrians to the Überseeinsel via the Europahafen. The planning authorities are also assessing the feasibility of an additional tram connection to supplement the two tram services and numerous bus routes that currently run through the Überseestadt. The north-western part of the district in Waller Sand currently has a bus stop, but the developers are looking into the possibility of developing a tram connection. A planning office in Dresden has been commissioned to conduct a feasibility study.

Educational facilities
The new quarter is also developing a rich educational landscape, as a primary school, secondary school and three nurseries are currently being built on the Überseeinsel. The school bells are expected to ring for the first time in September 2020. The local developers are also planning a new building for Bremen’s College of the Arts at Speicher XI, as well as a new building for the College for Wholesale, Foreign Trade and Transport (BS GAV). As the new Logistics School campus is located between Nordstraße, Cuxhavener Straße and Überseetor, it is very close to the timber and factory port, which means students will be able to get a feel for the logistics operations in the local area. The campus will be opened after the 2022 summer holidays.

More supermarkets on the way
The local residents can look forward to more shopping opportunities in the near future. In March 2020, Rewe Markt GmbH was awarded a contract to temporarily use 5,500 m2 of retail space at the wholesale market in the Überseestadt. The store is set to open in the fourth quarter of 2020. This is a temporary idea that will provide residents with a local supermarket until a long-term solution has been found. The Bremen-based start-up, myEnso, has also announced that it will be opening three mini supermarkets in the Überseestadt.

Excellent leisure facilities
In addition to innovative housing and business premises, a wide range of leisure facilities have also been developed in the local area. The locals can now enjoy popular recreational areas, such as the promenade along the Europahafen, the Überseepark with its skate park and the three-hectare Waller Sand beach park. When the “Federal Urban Green Awards” were presented by the Federal Ministry of the Interior, Building and Community earlier this year, Waller Sand was even recognised as an innovative location that was “fit for the future”. The large beach with a playing area and volleyball court is not only a popular destination for day trips – it also protects the area against flooding.

A bright future for Bremen’s youngest district
There are numerous other projects and initiatives in the works that will make the district more diverse and colourful. “The Überseestadt has managed to attract lots of investors – especially from the local region”, explains Kristina Vogt, Senator for Economics, Labour and European Affairs in the Free Hanseatic City of Bremen. “We’ve been working with partners like Gewoba to create affordable housing in the quarter. At the same time, cultural initiatives such as Zucker e.V. and Musikszene Bremen e.V. have found long-term facilities for their activities. What’s more, many new jobs have been created in the Überseestadt”, said the senator. When the Überseestadt was first put on the market, there were 300 companies with around 6,000 employees. There are now over 1,190 companies with around 18,900 employees – and the figure is constantly on the rise. Andreas Heyer, Chairman of the Board at Bremeninvest, adds: “The Überseestadt has been developing more dynamically than we expected”. At the start of the development project, 100 hectares out of a total of 288 were available for new business locations, and 92.7 hectares have already been marketed. “In view of the rapid development, the city is now placing particular emphasis on its traffic concepts and the expansion of public services in the local area”.

Number of companies and their development

The diggers have been working away, the architects have been busy drafting their plans, and the investors are in full flow: Large parts of the “Schuppen 3” warehouse on Konsul-Smidt-Straße are already being demolished to make room for the new EuropaQuartier by 2021, representing a new milestone for the Überseestadt with a mixture of housing, offices, shops and services.

Learn more
Urban development
“In 2040 the Überseeinsel will be the quarter where people will want to live and work.”