Eight buildings in Überseestadt that catch the eye

High, colourful or jagged: In Überseestadt you will find buildings in many shapes and colours. We have taken a closer look at eight particularly striking buildings. What is it about their special architecture? And what actually happens behind the scenes?

1. Zech at the head of the Europahafen 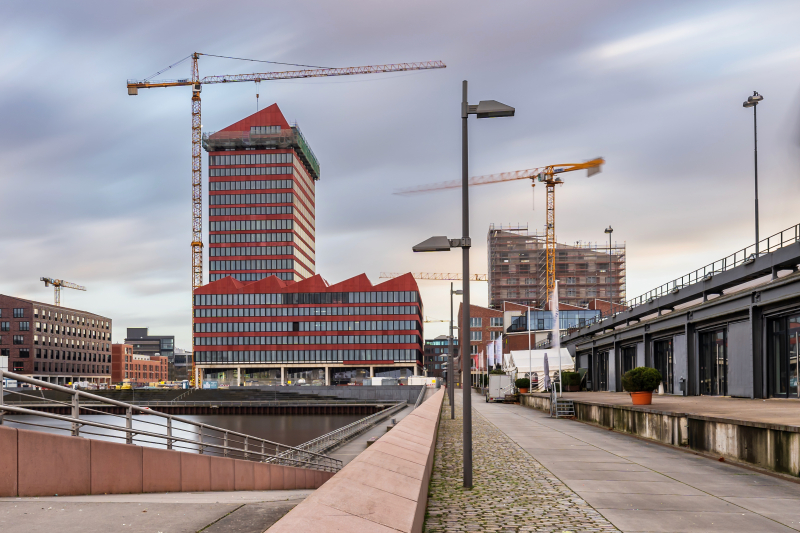 Eye-catcher at the head of the Europahafen: the new Zech Group headquarters © WFB/Krause

Since the beginning of 2019, people in Überseestadt have been able to watch the ensemble of buildings at the head of Europahafen grow. The Zech Group is now moving into the 18-storey office building with its headquarters. The office tower is flanked by two flatter buildings with flats, some of which are socially subsidised. In addition, the building complex will provide space for a market hall, events, various retail outlets and bicycle stations. The plans for the project were drawn up by the Copenhagen architectural firm Cobe, which was inspired by design elements from Überseestadt. The red brick façades, for example, are intended to be reminiscent of the quarter's historic industrial and harbour architecture.

2. Former customs clearance for lorries at the Hansator 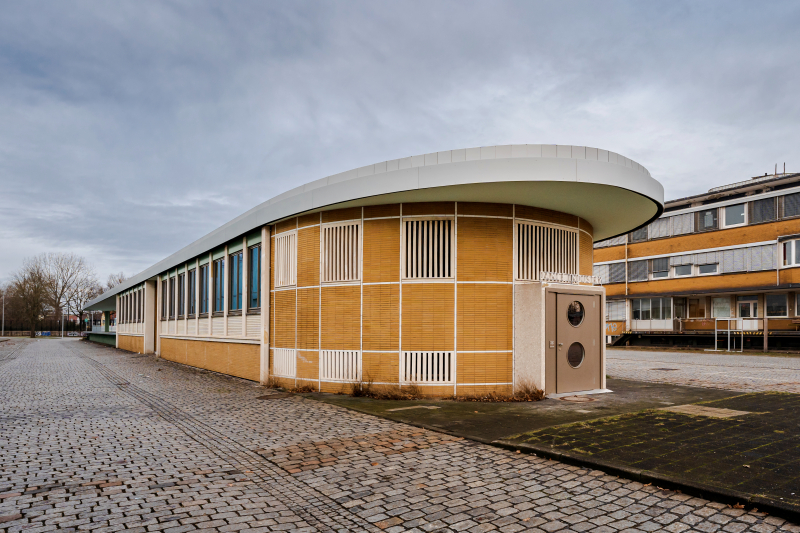 A breath of fresh air on the old customs office site: An architectural office moved in here in May 2022. © WFB/Krause

Undoubtedly one of the most interesting buildings in Überseestadt: this ellipsoidal building on Hansator used to house the customs office's lorry clearance building. The typical 1960s building includes the office wing of the time and a roofed ramp that served truck clearance. In 2019, a dance school moved into the low-rise building, which the owner couple christened "Dance Industry" - partly because the industrial charm can still be felt on the premises. In May 2022, the new tenant, the architectural firm gruppeomp, moved in and can look forward to a lively neighbourhood: the Musikszenen Bremen e.V. association, which organises the Überseefestival every year, took over the old customs office building in 2021 (Read more in this article).

At the transition from Bremen's city centre to Überseestadt, one building in particular catches the eye: the Weser Tower. Since its opening in 2010, the building designed by star architect Helmut Jahn has become a kind of landmark in Bremen. At 82 metres spread over 22 storeys, the Weser Tower is Bremen's tallest office building and the centrepiece of the Weser Quarter. Helmut Jahn, who was born in Nuremberg in 1940, spent most of his life in the USA and made a name for himself primarily with buildings made of glass and steel. The architect, who died in 2021, left his mark on numerous metropolises around the world. Among the buildings he designed are the Weser Tower in Bremen, the Messeturm in Frankfurt and the Airport Center in Munich. The Überseestadt has recently been enriched by an eye-catcher: the company Stroever Schellack has moved from its traditional location in the Muggenburg quarter into this new building. The colourful, shiny façade suits the Bremen-based company with 125 years of history. For Stroever Schellack is the only shellac producer in Europe. Shellac is used as a glazing agent, emulsifier or binder in cosmetic products such as hairspray, mascara or body lotion. In addition, capsules, tablets and dragées are often coated with shellac and chocolate bars, marzipan and pralines are also given a shiny surface by this natural product. You can read more about Stroever Shellac in this portrait on the website of WFB Wirtschaftsförderung Bremen GmbH. 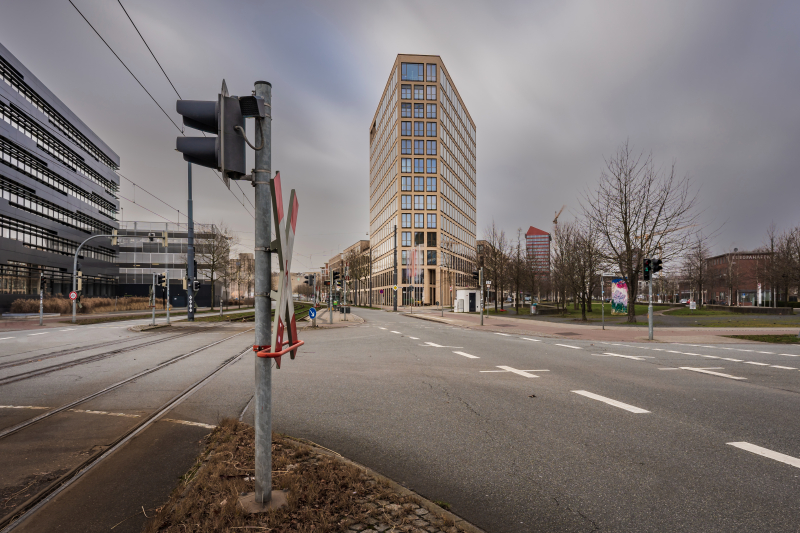 The 47-metre-high Bömers Spitze office building is one of the most popular photo motifs in the Überseestadt Bremen because of its unusual shape. There is 11,500 square metres of rental space on 13 storeys. The building name commemorates Heinrich Bömers. The merchant and Bremen senator headed the well-known wine shop Reidemeister & Ulrichs, which had the now listed Weinkontor built in the immediate vicinity of Bömers Spitze in the early 1950s. Bömers Spitze was designed by Hans-Jürgen Hilmes. Together with his wife Ebba Lamprecht, the Bremen architect planned various buildings in the Überseestadt Bremen - including the Landmark Tower. 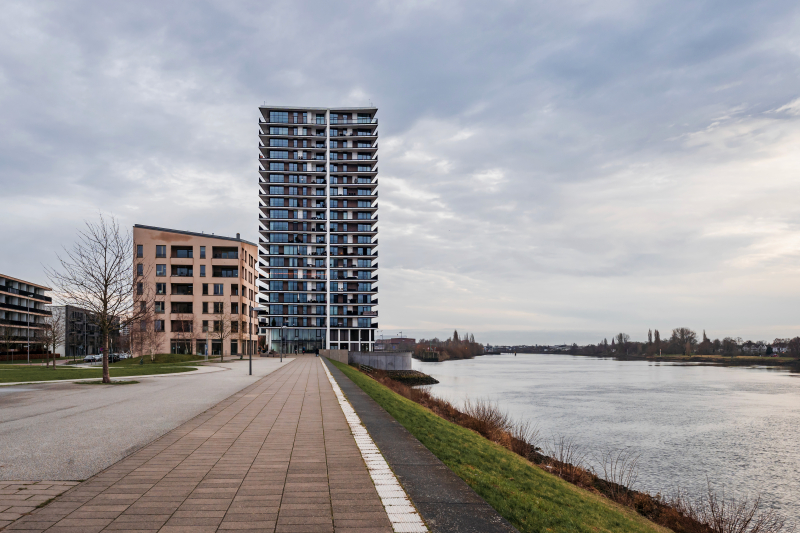 The Landmark Tower is an architectural highlight of Bremen. © WFB/Krause

The 67-metre-high Landmark Tower, designed by Bremen architects Hilmes und Lamprecht, is an architectural highlight and a real landmark of Überseestadt. No wonder, because the 20-storey building with its asymmetrical silhouette and the all-round balconies fanning out to the corners cannot be overlooked. Since 2010, the building directly on the waterfront has housed 53 high-quality flats and suites ranging from 60 to 160 square metres - concierge service in the entrance area included. The breathtaking view over the city can also be enjoyed through the floor-to-ceiling windows of the "Deck20" bar on the 20th floor.


7. The Imaging Source at Überseetor 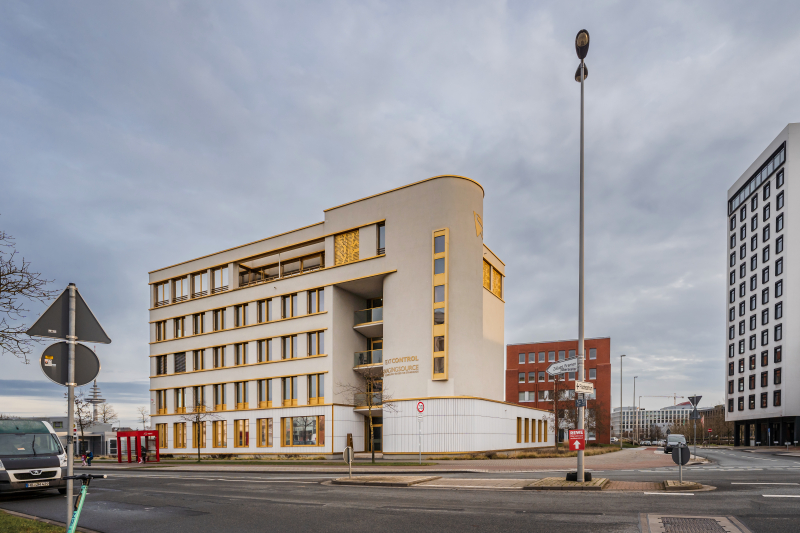 Stargazers are made happy here: at The Imaging Source in the Überseestadt Bremen. © WFB/Krause

What is behind this futuristic-looking building at Überseestor? The internationally active company The Imaging Source, which produces innovative image processing products, has its headquarters in the building, which was completed in 2017. The cameras from The Imaging Source are used in science, industry, medicine, the pharmaceutical and media industries, among others. They help to make things visible that cannot be seen by the human eye. The company makes stargazers happy because it also produces astronomy cameras for photographing the sun, moon and planets. 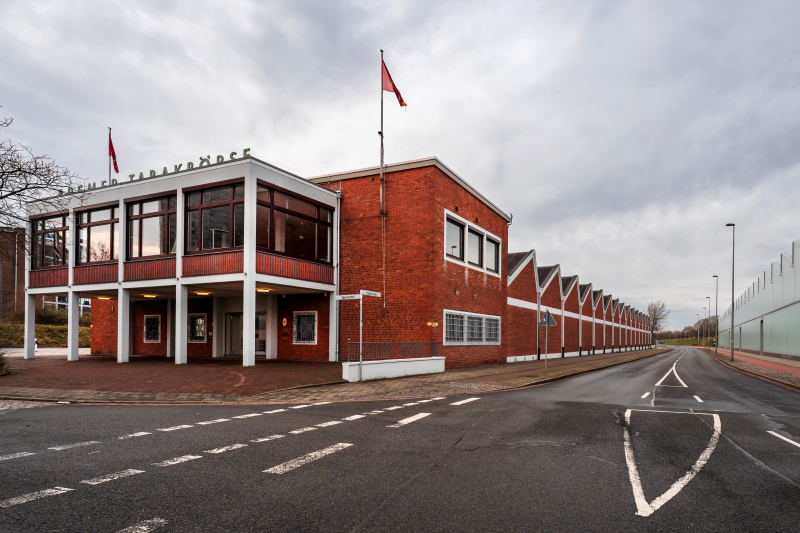 In the early 1960s, the European Tobacco Exchange was established near the Europahafen. © WFB/Krause

For 60 years, this striking building has provided a special flair in Überseestadt. In the early 1960s, the European Tobacco Exchange was set up near the Europahafen. Tobacco traders from all over the world travelled to the Hanseatic city for the auctions, at which 60,000 bales with a value of DM 250 million were auctioned off each year. Each auction was attended by 300 to 400 people. The building with the jagged roof was created according to the plans of Bremen architect Erik Schott and is considered a special example of post-war industrial architecture in Bremen. It has been a listed building since 2013.